De novo antibody sequencing by tandem mass spectrometry(MS/MS) uses the differences in mass of different amino acids to accurately determine the correct sequence. Distinguishing between isoleucine (Ile) and leucine (Leu) residues is troublesome in MS/MS-based de novo sequencing as the side chains are isomers and have the same mass, 113.08406 Da. Two peptides differing in amino acid composition by a substitution of Ile with Leu have identical masses and commonly used fragmentation modes, such as CID or HCD yield the same peptide fragment masses. 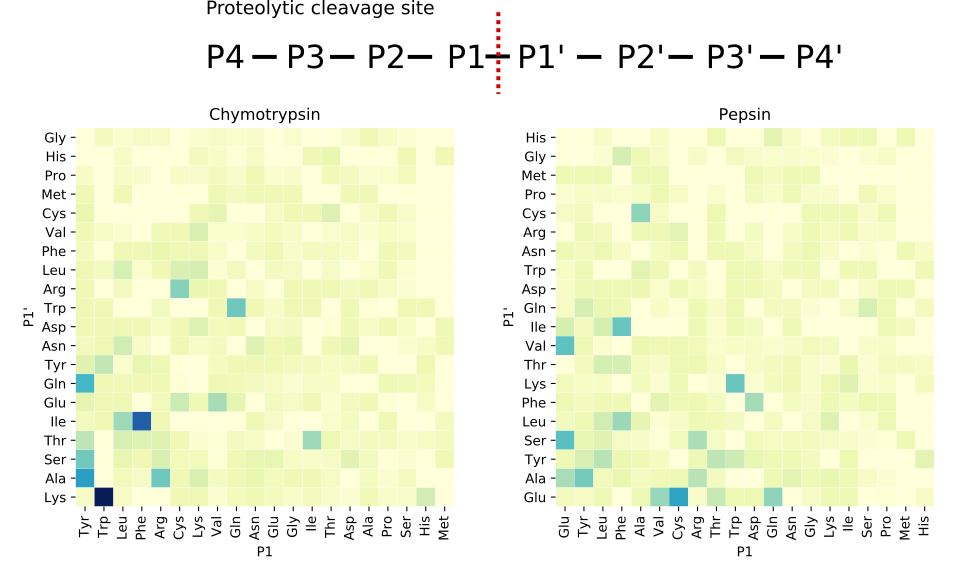 MS/MS proteomics workflows typically use enzymes to cleave proteins into smaller peptides since MS/MS instruments produce more interpretable fragmentation data from peptides than proteins. Each digestion enzyme has a propensity to cleave at specific residues.

As shown in the figure to the right, chymotrypsin tends to cleave after tyrosine (Tyr), tryptophan (Trp), leucine (Leu), and phenylalanine (Phe), while pepsin is less specific and cleaves before or after glutamic acid (Glu), tyrosine (Tyr), leucine (Leu), phenylalanine (Phe), and alanine (Ala). Both enzymes are more prone to cleave around leucine than isoleucine.

EThcD fragmentation of Ile and Leu side chains

While fragmentation typically occurs along the peptide backbone, fragmentation of residue side chains is also possible. Ile and Leu residues share the same elemental composition, but have different bonding patterns (see figure at top of post).

CLIPTM applies Bayesian inference that incorporates enzyme specificity evidence and characteristic z- and w-ion evidence to produce a log-likelihood score for an unknown Xle site being a leucine or isoleucine. Of the 62 sites on the anti-ERBB2 antibody, the accuracy of correctly calling isoleucine or leucine at a log-likelihood threshold of 1.0 was 89%. Only 9 Xle sites did not have a log-likelihood score surpassing the threshold. The anti-β Gal antibody had 67 sites, with similar 83% accuracy and 88% call rate at the same threshold. Prediction errors were typically the result of Ile and Leu appearing close together in sequence. Peptides containing both Ile and Leu can produce decoy w-ions through a radical site migration and cause erroneous calls (Zhokhov et al. 2017).

This case study demonstrates that CLIP™ can confidently distinguish the majority of Ile and Leu residues. When ambiguity persists at the MS2 level, a targeted strategy employing MS3 can be used to provide additional support.

You can read more about our Valens™ service. We’ve been de novo antibody sequencing for over a decade!

Papers that were helpful in the development of CLIP™ include: